You are here: Home / General / Episcopalian group seeks ‘the justice side of history’

As the Episcopal Church approaches its 78th General Convention in Salt Lake City this June, a new group has formed to advocate for a just and lasting peace in the Holy Land.

The Episcopal Committee for Justice in Israel and Palestine has issued a statement and resolution calling on the church to recognize the new political realities in Israel/Palestine and to adjust its policies to ensure it does not profit from human rights abuses and the suffering of Palestinians.

“As a church we have consistently opposed the occupation,” said The Rev. Canon Gary Commins, DD, past chair of the Episcopal Peace Fellowship and one of the authors of the statement. “At the present time, we may be complicit in the oppression of the Palestinian people. The time has long passed when the Episcopal Church must recognize this.”

“The Church’s approach should be straightforward,” the statement continues. “Boycott, divestment, and sanctions are tools of nonviolent peacemaking that put the weight of our corporate dollars behind our commitment to justice. The Church’s financial portfolio can again be used as an instrument of political change. And it can help to break the stalemate while illuminating the ways that America otherwise enables a brutal status quo.”

Titled The Episcopal Church’s Response to the New Political Landscape in Israel/Palestine, the resolution includes a forward by Archbishop Emeritus Desmond Tutu of South Africa. The proposal is quite pointed in its insistence that the denomination has a responsibility to take this action, despite the opposition of the Anglican Bishop of Jerusalem to exerting economic pressure on Israel, because of  U.S. financial and diplomatic support for the Occupation and the Church’s support through its investments.  “It is,” asserts the authors, “an American and Episcopal Church concern.” I urge you to read the entire resolution at Mondoweiss. 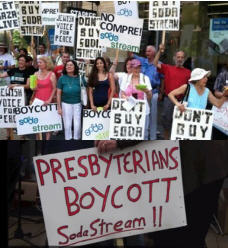 This important development continues the momentum we’re seeing among denominationally-based grassroots groups to bring their churches’ financial policies into line with their professed values on human rights.  As we’ve already noted, the United Church of Christ will ask delegates at its June convention in Cleveland to consider divestments and other measure to help promote peace in Palestine. Last summer, the General Assembly of the Presbyterian Church (USA) passed a measure endorsing divestment of church funds from companies involved in Palestinian oppression, as did the United Methodist Church.

Rev. Jeff DeYoe,  Moderator of the Israel Palestine Mission Network, offers these thoughts on what he calls the Episcopalian group’s “monumental proposal.” Jeff believes the Episcopalian resolution is  significant because it directly addresses the issue of investment versus divestment in driving political change.  In his piece, titled “When History Repeats Itself and Justice Happens,” he writes:

The Israel Palestine Mission Network, much like the Episcopal Committee for Justice in Israel and Palestine, has long argued that divestment and positive investment are both important tools …. But the truth remains: investment does not work if the matrix of occupation and oppression is not dismantled, and that requires all the non-violent tools at our disposal: boycott, divestment and sanctions.  The Israeli government has made it absolutely clear, especially as of late, that it has no intentions of changing anything about the occupation.

Even as we hope and pray for substantive change as a result of our efforts, the reality we face as a faith community is that at the very least the Church of Jesus Christ in any conceivable form does not invest in oppression and human misery.  If we do, we are complicit.

Along with the Episcopalian’s statement, I encourage you to read Jeff’s commentary in its entirety, as he takes time to reflect on the over 10 year struggle of the Presbyterian Church to divest from the Israeli occupation, and the current efforts of sister denominations such as the United Church of Christ to take similar actions.

“History repeats itself,” DeYoe observes. “With some of the same prophetic leaders bearing witness once again, we see yet another global movement for justice that will not be stopped.”  He prays that “we all find the justice side of history once again, and this time together.”