We were heartened to see our friends in Seattle organize in support of the recent World Week for Peace in Israel Palestine. The Kairos Puget Sound Coalition erected an 8-foot high by 20-foot wide model of the apartheid Wall in Palestine at the Westlake Center, which sits right in the middle of downtown Seattle. The display played off this year’s World Week for Peace theme “This Wall Will Fall” — a reference to separation barrier Israel has constructed in much of the West Bank.

Coalition members staffed a nearby  information table, answered questions and engaged people in conversation. The peaceful event also included lively protest songs, speakers and a reading of the Jerusalem prayer. You can read more about the event, and see more photos, at the coalition’s website. Puget Sound area churches and peace organizations that would like to borrow the model wall for their own events can contact the coalition at info@kairosos.org. 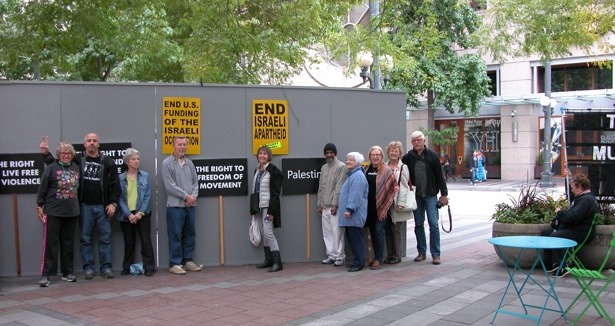 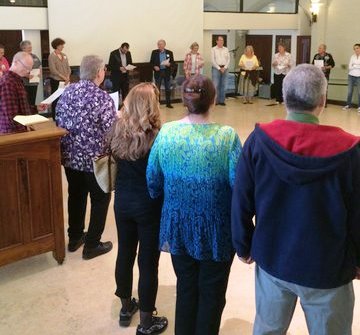 This post-Easter gathering of people of faith and conviction in Pasadena left us inspired and confident that, with Christ moving in our midst, the time justice for Palestinians is at hand. The lively workshops covered a number of action options in response to the call of Kairos Palestine, including political advocacy, BDS initiatives, alternative travel to Palestine, local church and denominationally-based efforts, and educational outreach.  Read the full report. 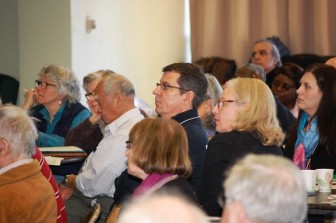 Connections among the 125 people in attendance at St. Mark’s Episcopal Cathedral in Seattle crackled with energy on Feb. 28.  Representatives from about 10 Christian denominations and at least three faith traditions took part.  Participants included newcomers to the issues of justice in Palestine as well as longtime activists. Read the full report.