You are here: Home / Newsletters / United Church of Christ moves forward on divestment and boycotts

How will we bring the devastating truth of the illegal military occupation of Palestine to our United Church of Christ delegates?

How do we tell them that boycott, divestment and sanctions (BDS) are the most powerful tools we have for non-violent, church-based, grassroots activism in the Holy Land?

These were some of the questions discussed in January when I and other members the UCC Palestine-Israel Network gathered to discuss our Resolution of Witness. The resolution, which will come before the UCC General Synod when it meets June 26-30 in Cleveland, Ohio, calls for divesting from companies that profit from the Israeli occupation of Palestinian territories and for boycotting products produced in such territories by Israeli companies. If approved by the Synod delegates, it would be an historic affirmation by the UCC for Palestinian justice.

The UCC Palestine-Israel Network drafted the Resolution of Witness in response to the 2009 appeal of Palestinian Christians to consider the use of non-violent BDS tactics to help bring about justice for Palestinians. We brought it before five UCC Conferences — Central Atlantic, Central Pacific, New York, Connecticut, and New Hampshire — and  received strong affirmative votes in each of these regions. 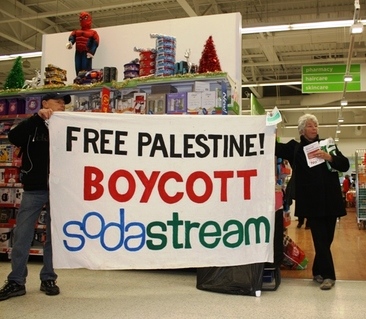 With the resolution now coming before the General Synod in June, we have the opportunity to sanction and initiate divestment of church funds from companies that support and profit from the military occupation of Palestine. These specifically are Caterpillar, Motorola Solutions, Hewlett-Packard Development Company LP, G4S, and Veolia Environnement. The resolution also endorses the boycott of Israeli companies operating inside illegal West Bank settlements including but not limited to Ahava, Soda Stream, Hadiklaim.

The resolution has other provisions, too. It asks church leaders to bring political pressure for Congressional enforcement of the U.S. Foreign Assistance Act and the U.S. Arms Export Control Act. It also affirms ongoing dialog among the Abrahamic faiths. And, finally, it commends the Kairos Palestine document for study in all congregations of the UCC.

At our January Palestine-Israel Network meeting, our preparation for gaining General Synod delegate support began in earnest. We developed action plans, clarified strategies, and identified challenges to building support within the denomination. Wise counsel and encouragement came from John Wagner of United Methodist Kairos Response, Bob Ross of the Israel Palestine Mission Network of the Presbyterian Church (USA), and Anna Baltzer of the U.S. Campaign to End the Occupation.

While we have a good start, help from our community will be needed to win approval of the resolution. We ask for assistance from any UCC members with a passion for this issue. I am also seeking endorsement of our resolution from ecumenical partners, interested individuals, those having personal experience with the military occupation, and church/civil society leaders both in Palestine and here in the U.S. Those willing to endorse our nonviolent, church-based effort to bring pressure to end the occupation of Palestine, please get in touch with me. I can be reached at ddulin@kairosusa.org.