You are here: Home / Newsletters / On “Lost Causes:” an Advent Message 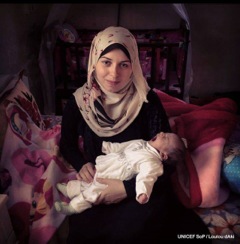 Our friend Noushin Framke of the Presbyterian Israel/Palestine Mission Network has been sending around her own series of Advent sermons.  Each one consists of a single photograph.

Shown here is Noushin’s photo for this fourth week of Advent.  The caption she includes reads: “I hope my daughter will live in peace.” New mother Safa, 20, with daughter Asil in Gaza.”

She also adds the following quote from scripture (Luke 1:46): “My soul magnifies the Lord, and my spirit rejoices in God my Savior.”

Mary’s hymn of praise, of course, echoes an earlier such prayer by Hannah, the mother of Samuel, in the Hebrew Scriptures, herself invoking the Psalms in her proclamation of joy at this sign of hope in the midst of her suffering. The triumph of hope over despair spans the centuries.

‘Lost causes’ then and now

Richard Falk, a professor of international law and former United Nations Special Rapporteur on the situation of human rights in the Palestinian territories, recently published an essay entitled “On ‘Lost Causes’ and the Future of Palestine.”  I recommend the entire essay to you.  Falk opens the essay in this way:

Part of my interest in this theme of “lost causes” derives from a rather tense encounter I had with the French ambassador to the United Nations at a private dinner at the end of my term as UN special rapporteur for occupied Palestine. Our host, who had invited a dozen or so diplomats to comment upon the Israel-Palestine conflict, started the ball rolling with a very provocative statement: “Let’s face it: the conflict is over, Israel has won, the Palestinians have been defeated, and there is nothing more to be done or said. I am not happy about this, but this is the reality. We should move on.” What follows can be seen as a more considered response to this diplomat’s stance of cynical realism: it is my insistence that Palestine is not a lost cause, and that even if it were a lost cause from the perspective of realism, a continued commitment to it is greatly preferable to defeatist resignation and indifference toward such a grossly unjust outcome of such an epic struggle.

My deeper conviction is that the appearance of Palestinian defeat is an optical illusion … that while Israel is winning one war due to its military dominance and continuous establishment of “facts on the ground,” Palestine is winning what in the end is the more important war, the struggle for legitimacy, which is most likely to determine the political outcome. If we examine conflicts over the past fifty years involving struggles against foreign and especially colonial occupation, we come to the astonishing conclusion that in most cases, the side that was weaker militarily controlled the political outcome. The side with the greater perseverance and resilience, not the side that controlled the battlefield, won in the end. … [philosopher Slavoj] Zizek argues for “faith in lost causes, causes that, from within the space of skeptical wisdom, cannot but appear as crazy.” The point is that a burning faith in the unrealizable creates the possibility, however remote, that what seems beyond reach will at some point be reached.

Falk offers two sets of conclusions about the political process that we must pursue to reach that point, and ends in this way:

Let me finish, then, with a reaffirmation of the complex relationship between our limited knowledge, especially of the future, and our political and moral will, which has the irreducible freedom to create its own horizons. It is for this reason alone that it is empowering to join with Edward Said in declaring our defense of lost causes, in this instance that of the Palestinian people, who have endured an unspeakable ordeal of victimization for so long. As in South Africa, where whites were able to remain after the collapse of the apartheid regime, it will take a comparable political miracle to reach a just and sustainable peace in Palestine, one that upholds the equal dignity of both peoples. In this spirit, I end with the enigmatic plea of the poet W.H. Auden: “We who are about to die demand a miracle.”

The Hebrew prophet Zechariah, speaking to the Judeans returning from Babylonian exile offered these words to his people engaged in the rebuilding of the Temple: Not by might, nor by power, but by my spirit, says the Lord of hosts (Zechariah 4:6).

A much-overlooked aspect of this prophetic vision includes a fascinating reference to a familiar tree:

The angel who talked with me came again, and wakened me, as one is wakened from sleep. He said to me, “What do you see?” And I said, “I see a lampstand all of gold, with a bowl on the top of it; there are seven lamps on it, with seven lips on each of the lamps that are on the top of it. And by it there are two olive trees, one on the right of the bowl and the other on its left.”  I said to the angel who talked with me, “What are these, my lord?” Then the angel who talked with me answered me, “Do you not know what these are?” I said, “No, my lord.”  He said to me, “This is the word of the Lord to Zerubbabel: Not by might, nor by power, but by my spirit, says the Lord of hosts.”(Zech 4:1-6)

The prophet (he had been a priest, after all) still doesn’t get what the olive trees are doing there.  Golden lamps, yes – but trees?

The reference to anointing (the Hebrew verb is the source of the word “Messiah”) is of course taken as a prophecy looking forward to promises fulfilled in the New Testament.  Zechariah in his own time, 500 years before Jesus’s birth in Roman-occupied Judea, was very much concerned about rebirth and new beginnings, living at the time of rebuilding the Jerusalem Temple. In this Advent season, it’s fitting to think about what it means to build a new Temple. Scholars have puzzled over the choice of olive trees in Zechariah’s vision. For those of us involved in the struggle for justice in the Holy Land today, however, the symbolism of the olive tree speaks powerfully. In my recent book A Wall in Jerusalem I quote from Rev. Mitri Raheb, the pastor of the Christmas Lutheran Church in Bethlehem speaking at the Kairos for Global Justice conference in Bethlehem in 2011:

The Kairos document has a whole section about hope, and for me this is the most powerful one. There is a big difference between optimism and hope. I’m not optimistic at all! In fact, my political analysis is saying that we are heading toward the most sophisticated apartheid system that ever existed in modern history … Yet even so, the Kairos document tells us that we can and should have hope. Martin Luther said it best: even if we knew that the world were coming to an end tomorrow…even if we knew that the international community would not change tomorrow because of Kairos, even if we knew this, we would only have one option: we would go out today, into our garden, into our world, into our societies, and we would plant olive trees.

“This is what Kairos is about!” Raheb reminded the gathering:

Planting olive trees when people think you’re crazy. But I tell you, sisters and brothers, a crazy world like this needs crazy people like us. Unless we plant these olive trees today, there will be no shade for our kids to play in the day after tomorrow. There will be no oil with which to heal all these wounded Israelis, Palestinians, and everyone else. And there will be no branches to wave when peace comes. This is the spirit of the Kairos document, that it breathes a spirit of hope, a hope that springs from the resurrection of a culture of life.

With the portrait of Safa in Gaza and her new child before us, let us join in Diane Dulin’s Advent prayer, a prayer for the miracle and hope of birth, for hope in the midst of suffering and oppression:

Allow the joy of Mary to propel us forward without discouragement.
Show us how to join in the labor pangs of those who bring a new world into being.