You are here: Home / Newsletters / The blessing of Dick Leon 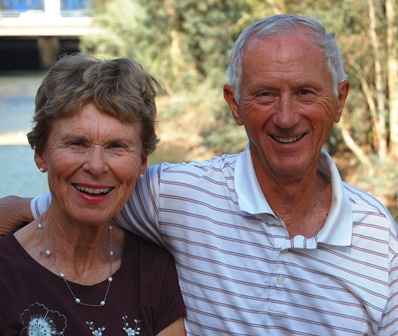 Dick Leon and his wife Carolyn in Palestine

I had the good fortune to encounter the Rev. Richard Leon a little over a year ago. Actually, Dick sought me out. That’s who Dick was, a man who reached out to others.

Our meeting took place not long after the semi-retired Presbyterian pastor had returned from the Holy Land. While there, he saw for himself what was happening to Palestinians in the West Bank.  After his return to the Seattle area, Dick got busy.

He enlisted a group of lay folks at the large church where he had served as senior pastor with the goal of helping other Christians better understand and respond to the plight of the Palestinians. Helping the Christian community discover its role in bringing peace and justice to Palestine became Dick’s passion.

When Dick found out that I lived just down the road in Portland, Oregon, he called me up and asked me to conduct a Kairos USA workshop for parishioners in his area.  Our work together began, and we soon became fast and dear friends.

In August of this year I asked Dick to take over the role of chairperson of the Kairos USA Board of Directors. He jumped in with both feet. We were on the phone with each other almost daily with ideas and plans to strengthen the mission of Kairos USA. Every day, I pinched myself, realizing that this extraordinary man, who at 79 could legitimately claim the right to a well-deserved retirement, had taken on the leadership of Kairos USA.  I had gained a colleague and a friend for life.

Tragically, Dick was killed last month in bicycling accident. The news broke the hearts of many, including mine. Dick was beloved for his practical wisdom, his compassion, his quiet integrity, and his uncommon ability to listen and engage and encourage. Moreover, Dick’s faith was deep, it was steady, and he lived it in every aspect of his life. The time I got to spend with Dick was all too short, but I treasure it.  Like everyone who knew and loved Dick Leon, I carry him with me, an inspiration and guiding spirit.  We will miss him.

While Dick’s leadership at Kairos USA was prematurely cut short, he leaves as his legacy a renewed commitment to our mission, a mission he embraced without reservation and with the wisdom and enthusiasm he brought to everything and everyone he touched.