You are here: Home / General / Public witness: Gather at a wall for the upcoming World Week for Peace

In support of  World Week for Peace in Palestine Israel, Kairos USA is encouraging peace and justice advocates across the U.S. and around the world to demonstrate against the illegal West Bank separation wall. 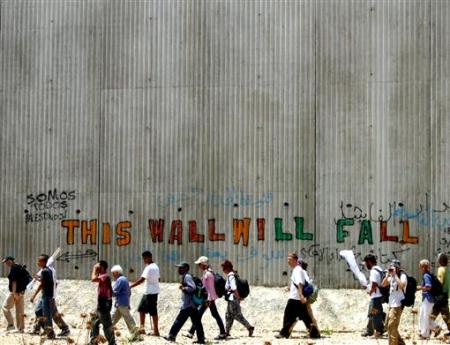 Palestinians and International Solidarity Movement members walk during a rally along the separation wall in the West Bank town of Qalqilya.

The 2015 theme for World Week for Peace, which runs September 20-26, is “God has broken down the dividing Walls.” In a very literal sense, it refers to the separation wall within the West Bank that’s currently more than 280 miles long, and slated for completion at more than 400 miles of land-grabbing twists and turns. It epitomizes the matrix of control and military subjugation under which Palestinians live.

The fact that more than half of the wall in the West Bank falls on the Palestinian side of the Green Line substantiates the ongoing theft of Palestinian land which is occurring via still-ongoing construction. In addition, Gaza is walled in and shut off by walls both visible and hidden. Via land, air and sea, Israel maintains complete siege and security control over this small strip of land.

During World Week for Peace, Kairos USA is asking our friends to send a clear signal to policy-makers, community groups and their own parishes about the urgent need for a peace settlement and breaking down “the dividing wall.”  For those who might be traveling in Palestine Israel in late September, think about spending time worshiping at the Church of the Checkpoint, a ministry based at the gateway through the wall where Palestinians pass going between Bethlehem and Jerusalem. You can read more about it here.

For those of you not heading to the Holy Land, consider gathering at a wall in your community or church grounds. Conduct a worship service there. Consider using a liturgy like this that speaks in the voice of Palestinian Christians. Seek publicity and get interviewed. Don’t be shy! Find your voice and speak in solidarity for Palestine.

Here are some resources the Palestine Israel Ecumenical Forum (PIEF) is making available to help you with programming for your event.

Some materials are available in languages other than English. Check out the various options at the PIEF website. 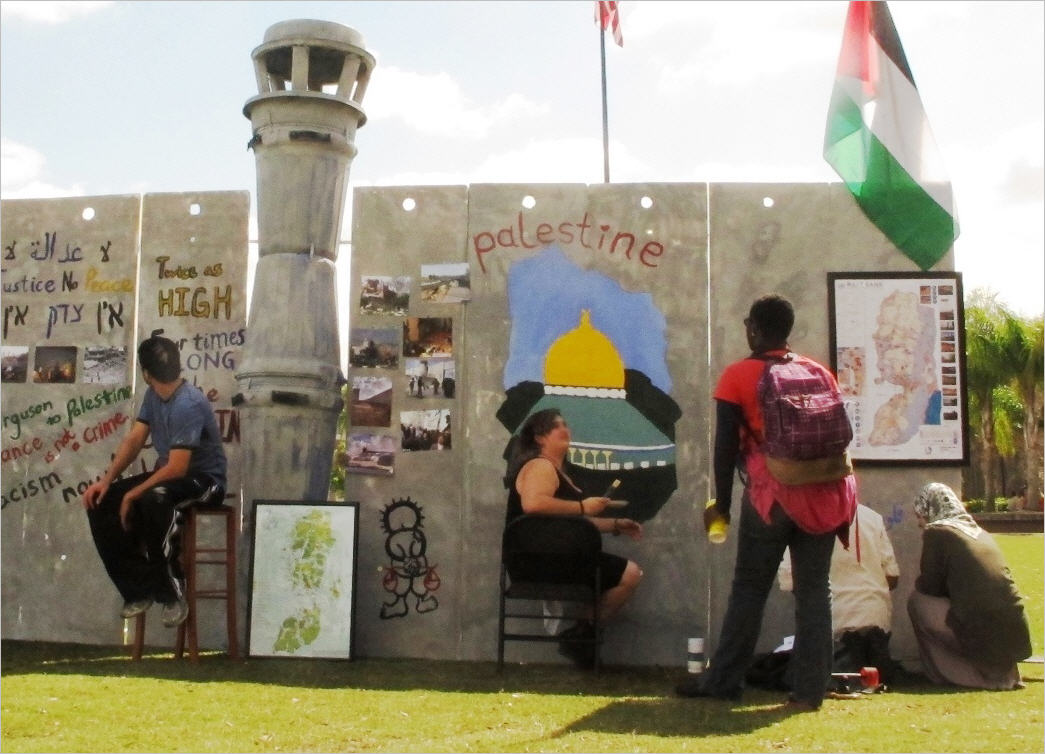 The Orlando, Florida chapter of Students for Justice in Palestine built a mock separation wall this spring.

Kairos USA is also eager to pass along ideas to help you create a focal point for a public gathering in September. Here’s one idea.

The Orlando, Florida chapter of Students for Justice in Palestine this spring built a mock separation wall in a public location.  The students posted on their wall the names of both Palestinian and Israeli casualties from last year’s Gaza War. They also attached relevant maps that they found at the UN Office for the Coordination of Humanitarian Affairs website. Click here to see photos of the mock wall, along with instructions on how to build it!

So please send me (ddulin@kairosusa.org) your ideas and plans, along with photos, of Word Week of Peace activities you’re working on. With your permission, I’ll include them in upcoming Kairos USA communications.