You are here: Home / General / Our Kairos moment: UCC General Synod and beyond

It’s been quite a ride! Our surprising, overwhelming and longed-for victory at the United Church of Christ General Synod sent many of us into orbit and I, for one, am just now returning to earth. For the record, 80% of the votes cast as Yes or No were affirmative. (If one counts abstentions, the Yes votes gained a 75% majority.)

With this convincing victory, the United Church of Christ has gone on record supporting divestment of its pension and investment funds from companies which sustain/support/profit from the military occupation. Additionally, we voted to boycott products produced within illegal settlements in the West Bank; we resolved to pressure our government to abide by its own laws prohibiting military assistance to nations which violate human rights; we endorsed wide deployment within our denomination of the Kairos Palestine document and other materials which inform our understanding of the issues; we resolved to continue interfaith dialogue as a road to holy reconciliation.

Members of the UCC’s Palestine Israel Network members left Cleveland grateful to the voting delegates, our partners and allies near and far, and local Palestinian activists of Cleveland. In addition, there was an amazing cadre of volunteers who pushed us to victory via top notch organizing and long days and nights of cheerful, dedicated effort.

The vote was a testimony to the committed community that stands behind the Palestinian justice movement. Our UCC Palestine Israel Network could never have done it alone. Bob Ross (Israel Palestine Mission Network, Presbyterian Church USA), Sydney Levy (Jewish Voice for Peace) and Anna Baltzer (U.S. Campaign to End the Occupation) coordinated with UCC-PIN chair Gay Harter and other key leaders to connect with the majority of the delegates who voted. Don Wagner (Friends of Sabeel North America) spoke persuasively. Chris Hazou (Institute for Middle East Understanding) helped us with media and communication. 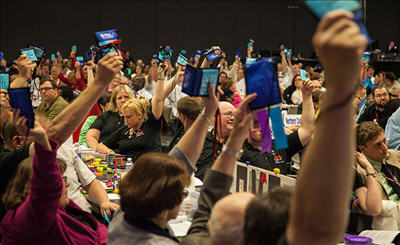 We believe the rigorous process of presenting our resolution to 10 regional UCC conferences prior to Synod enabled widespread knowledge and support to grow before anyone arrived in Cleveland. Each of these regional victories represents long hours of effort by local advocates. Now it’s the job of our Palestine Israel Network to help the denomination adopt the multi-faceted resolution.

Several take-home conclusions that I brought back from Cleveland emerge in my thinking:

Another thought is that, as a movement, we are moving forward even when we encounter setbacks. During our six days in Cleveland we prayed often for the Episcopal and Mennonite churches that were also deliberating resolutions on Palestine at their national gatherings. Along with activists in those denominations, we were disappointed that positive votes were not obtained. However, our partnerships and collaboration among denominations allow constant solidarity with the continuing community of fellow activists in those churches. Our steadfast efforts are needed equally before, during and after each win or a loss. The movement we share is far larger than any single denomination, resolution, campaign or affiliation.

In our UCC situation, we have enjoyed significant (though not unanimous) support from our denominational leaders. We appreciate this deeply. Nevertheless, it remains true that our movement is grassroots, person-to-person, and still very much in the building stage. This is a reality which we share with all American denominations, no matter where they stand on BDS.

Those of us working hard in Cleveland, as well as those supporting us through prayer and solidarity at home, all knew this: win or lose, the hard work for justice would continue following the vote in Cleveland. And so it does. We celebrate a good victory. We work to implement it fully. We always remember that the people of Palestine still are not free. And so we persevere.

(The Rev. Diane Dulin is a retired United Church of Christ minister and Director of Church Participation and Denominational Relations for Kairos USA.)