You are here: Home / Newsletters / Injustice anywhere is a threat to justice everywhere 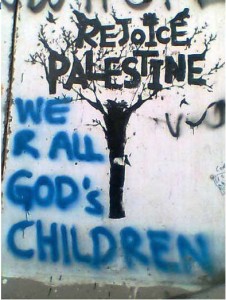 Kairos USA works to unite and mobilize Christians in the United States to end Israel’s oppression of Palestinians. Our focus on the issue of Palestine, however, only serves to heighten our awareness of how structures of injustice exist throughout the world, including in our own communities. The grand jury decision recently handed down in the case of the killing of Michael Brown in Ferguson, MO has surfaced in dramatic fashion the heartbreaking issues of racial injustice that remain entrenched in our society.

In that light, we affirm the efforts of our partners and constituent faith organizations to speak up about what has happened in Ferguson. The Presbyterian Church (USA), the Samuel Dewitt Proctor Conference,  United Methodist Church, Sojourners and others have issued bold statements that call on their communities to uphold the traditions of social justice on which their faith is founded. Moreover, they provide encouragement for those offering prophetic witness to the injustice in Palestine.  The statement by Jewish Voice for Peace issued in the weeks following the shooting of Michael Brown highlights the specific connections that have been drawn between the Palestinian cause and the ongoing struggle for racial justice in the United States.

The words of the Rev. Martin Luther King Jr. quoted in the title of this blog post provide the guidepost for our actions and our mission. We pray for the courage and strength to have honest conversations about race where we live, work, and worship. We pray for safe spaces in Ferguson and in all communities for people to voice their views about what is happening around the world as well as in our own communities. We hope for lessons learned, lives changed, and the transformation of unjust systems in the United States and across the globe in order to bring about the world God has called us to co-create.