You are here: Home / Newsletters / A conversation with Mary Morris, Episcopal leader for justice in Palestine

“We will keep on pushing for action on behalf of Palestine.  We don’t have a choice, despite the odds.  If we gave up, we would lose our soul.  This is a long-term effort.  We are not going to give up.” 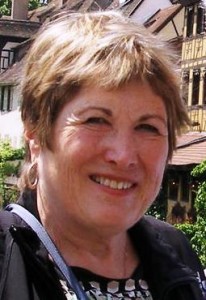 These are the words Mary Morris, a fellow Oregonian and member of the Episcopal Peace Fellowship – Palestine Israel Network (EPI-PIN) steering committee.  Mary also serves as convener of the Oregon Bishop’s Committee on Israel Palestine.

Equally impressive is that Mary has developed deep connections with Palestinians living and working in the West Bank and Israel in her role as an ecumenical accompanier in the World Council of Churches Ecumenical Accompaniment Programme in Palestine and Israel (EAPPI). Focusing on local organizing efforts, she leads witness trips to Palestine, including a journey which will take place October 14-31.

For the first installment of our series on U.S. church activists, I sat down with Mary to get her perspective on Episcopal efforts, challenges and opportunities.  Mary is an inspiring example of how a lifelong commitment to her church – in this case the Episcopal Church of America – is expressed in the work to bring a just peace to the Holy Land.

Responding to church opposition to BDS
The Episcopal Church in Palestine/Israel is quite active in providing direct assistance to a wide range of civil society institutions in the Holy Land.  At present, however, the Episcopal Church of America officially opposes the actions of  boycott, divestment and sanctions (BDS) called for by Palestinian civil society and the leaders of most Palestinian Christian denominations. Mary described to me the continuing steadfast efforts of activists who, while aware that the institutional church will often be slow to take public stances on controversial issues, still consider it their responsibility as people of faith to refuse to take a “neutral” stance in the face of grave injustice, violence and harm.

Asked how she lives with the challenge of a church hierarchy which opposes BDS or other actions that Mary favors, she described the steadfast perseverance which she and others follow, modeling their patient, committed and determined efforts after the Palestinian example. In Oregon, Mary and her coworkers have been fortunate to gain the support of Bishop Michael Hanley, who has urged widespread and full-hearted study of Kairos Palestine with its range of suggested actions in response to the Palestinian situation.

“We welcome offerings of curriculum which allow continued study of Kairos Palestine,” Mary noted, “and consider these efforts extremely helpful either as a first introduction to the issue or as follow-up after other introductory curricula have been used.” Mary’s comment prompts me to add that the need for curricula and training opportunities are an example of how nonaffiliated, interdenominational or interfaith groups like Kairos USA can play a helpful role.  We can serve as partners in providing educational resources, connection with groups across the ecumenical spectrum, modes of action and solidarity, and access to public witness on behalf of justice for Palestinians. 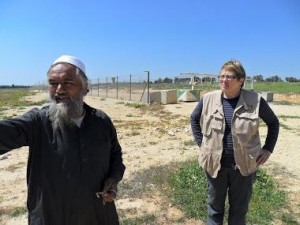 Mary’s activities also include organizing work for the Episcopal Palestine Israel Network.  Network leaders have been working to identify people in various cities and dioceses to bring the resources and message of the PIN to their churches and communities. Getting these educational resources to the churches through the denominational structure of provinces and dioceses is a key goal of the PIN. “Our grassroots efforts are person-by-person, diocese-by-diocese, province-by-province,” Mary told me.

Connecting with local dioceses
The work can be slow, she said, but they are making progress. As EPF-PIN coordinator of national organizing, Mary has found sympathetic contacts within each province who are, in turn, connecting with Palestine advocates in each diocese.  Of particular focus is to connect with each diocese’s Committee on Middle East concerns, or to help create such a committee in each diocese if one does not exist.

In addition to its focus on national organizing, the EPF-PIN also has coordinators to direct work on Palestine educational programs as well as work on relevant legislative issues.  There is an effort to track witness trips to Palestine/Israel undertaken by Episcopal members and also to prepare for the June 2015 General Convention slated to convene at the Episcopal Cathedral in Salt Lake City. A highlight of that gathering will be its commemoration of the 75th anniversary of the Episcopal Peace Fellowship.  The PIN has significant plans for the meeting, including efforts toward a resolution and plans for a powerful visual portrayal of life under the shadow of the Separation Wall.

As I said goodbye, offering Mary blessings and strength for the work ahead, I recalled her words to me:  “We don’t have a choice, despite the odds.  If we gave up, we would lose our soul. This is a long-term effort.” Mary’s life and work, and the community she is helping to build, is testimony to her commitment to justice for Palestine and her deep – could we say stubborn?– love for her church. We draw inspiration from her work and that of many others working within their local churches and denominational structures to fulfill Jesus’ instruction to “do for the least of these.”

Visit the Episcopal Peace Fellowship Palestine-Israel Network website to learn more and to sign up to receive its excellent newsletter.

(Rev. Diane Dulin is Director of Church Participation and Denominational Relations for Kairos USA. For 21 years she served as a pastor at First Congregational United Church of Christ in Hillsboro, Oregon.)