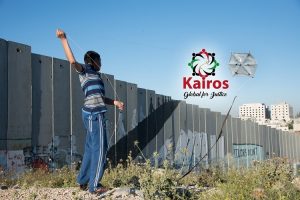 May 15 marks the anniversary of the Nakba.  In this petition, Global Kairos for Justice, a partner of Kairos Palestine, asks to the world to support its call to action, to sign the petition and to be partners in local and regional events on or around May 15, 2019. This petition comes from Kairos Palestine and its partner movements, Global Kairos for Justice.

In December 2018—inspired by the Kairos Palestine document and representing a broad spectrum of organizations, faith communities and other groups—people from around the world gathered in Bethlehem Palestine to further the Kairos call for an end to the State of Israel’s oppression of the Palestinian people and its occupation of Palestinian territories. With love as its logic, the call is grounded in nonviolent resistance to oppression and violations of human rights.

The petition declares as unjust and illegal the occupation policies and practices of the State of Israel, including creating over 700,000 Palestinian refugees, occupying the remaining 22% of Palestine in 1967 in contravention of UN Council Resolution 242, imposing an unjust system of military law, and adopting the discriminatory July 2018 Nation State Law. It calIs on the State of Israel to end the occupation of Palestine;  restore the full and equal rights of and end discrimination against Palestinian citizens living in Israel and all inhabitants of the Land; respect the right of return of Palestinian refugees.

"Kairos is us."  Kairos Palestine 9th Anniversary Gathering in Bethlehem

On December 6, hundreds of Palestinians and internationals gathered on the 9th Anniversary of “The Kairos document - A word of faith, hope, and love from the heart of Palestinian suffering.”  It was a meeting that holds great hope for the ability of the growing global network of church-related organizations to spread the prophetic message of Kairos theology and to mobilize solidarity, support, and faithful witness at the grassroots of churches, communities, and nations.

The conference statement issued a stirring call to the global ecumenical community:

We welcome the growing awakening in the global Christian community. We take heart from the prophetic support for our cause, taking courage from their non-violent resistance and actions for justice, for the economic measures taken, and for standing in solidarity with all Palestinians here and the diaspora. We encourage all Christian communities to follow this lead and speak truth to power. Ecumenical structures should not be silent, choose the path of shallow diplomacy, or have lukewarm responses, which will directly support the Israeli policies of occupation. 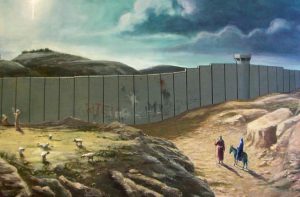 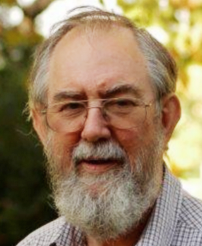 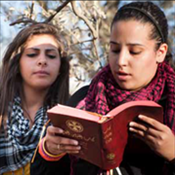 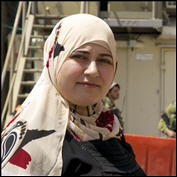 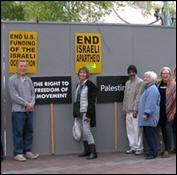 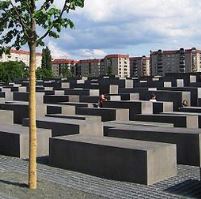 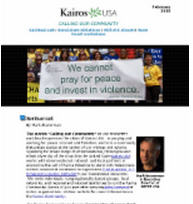